Mayyun also documented the testimonies of other civilians about the Houthi group’s use of food and financial aid provided by United Nations organizations to finance the war (the war effort) and to blackmail the population to push their children to the battlefronts.

The testimonies of civilians living in the governorates of Sanaa, Dhamar, Ibb, and Maqbna District in Taiz governorate also confirmed that food and cash aid is distributed to families of fighters on the fighting fronts from the Houthi group, as well as to families of the dead and wounded belonging to the same group and members of the mobilization committees of the fronts.

The organization also received a collective complaint from the residents of the Al-Barsha ghetto in the Maqbna district, stamped with the seals of secretaries, sheikhs and notables of the isolation, stating that delegates in the isolation of Al-Barsha are selling relief provided by the World Food Program through the partner, the family organization, in addition to school feeding provided to the 22 May schools in the Suwayhra area and Umm Al-Qura school in the area Album presented by the World Food Program for the month of November and December 2021.

The complaint confirmed that the Houthi leadership, in cooperation with the family organization officer, sold the quantity allocated to the Barsha children on the black market, and only distributed a fine bag to each beneficiary.

Mayyun received testimonies belonging to the Houthi group in Sanaa confirming the involvement of the Executive Chairman of the Supreme Council for the Coordination and Management of Humanitarian Affairs and International Cooperation, Ahmed Hamed, and the Secretary-General, Abdul Mohsen Al-Taws, in the sale and distribution of food aid through traders affiliated with the Houthi group.

The testimonies show that Hamed and Al-Tawoos are involved in the monthly sale of three million bottles of cooking oil provided by the United Nations World Food Program and other relief organizations.

Mayyun also verified the involvement of the Supreme Council for Humanitarian Affairs in financing the kitchens of the armed and security forces of the Ministry of Defense and Interior in Sanaa and the rest of the governorates under the control of the Houthi group.

Mayyun confirms that she verified that the field surveys carried out by the Supreme Council for the Coordination and Administration of Humanitarian Affairs and its branches in the governorates during 2017 and 2018 categorically violated the standards that must be adhered to in counting cases.

The organization has verified, beyond any doubt, that the Supreme Council for the Coordination and Administration of Humanitarian Affairs and its branches have added the names of the military, security, and families belonging to the Houthi group, including the dead and wounded, and members of the recruitment committees, to the lists of cases benefiting from food and financial aid, and depriving families who deserve this aid.

As we at Mayyun Organization review these grave violations against the starving population in Yemen, we call on the World Food Program to assume its responsibilities and conduct a firm investigation without delay into these documented facts, especially as the program has previously documented similar violations in which the Houthi group was directly and indirectly involved.

We call on the World Food Program to change its mechanism based on the Supreme Council for the Coordination and Management of Humanitarian Affairs in counting the cases of beneficiaries and distributing aid, and to find an effective mechanism to ensure that aid reaches the beneficiaries.

At the same time, we urge the program to raise the United Nations Under-Secretary-General for Humanitarian Affairs regarding these violations and the involvement of leaders in the Supreme Council in employing aid for military purposes, most notably recruitment, with a recommendation to include them on the UN sanctions list in his upcoming briefing to the UN Security Council. 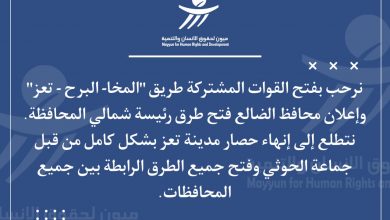