The Houthi group continues to claim the lives of civilians and destroy civilian objects south of Marib by artillery and missile shelling, disregarding international humanitarian law, the latest of which was targeting a mosque and a religious education center in the Juba district on Sunday evening, October 31, 2021 AD with two ballistic missiles.

Reports from al-Juba confirm that the first missile fell on a mosque and the other on the Salafist “Dar al-Hadith” center in the densely populated al-Amoud area and forcibly displaced people, killing 8 and wounding 22 people, including women and children.

This unjustified attack on the center, which includes families of students who were previously forcibly displaced from their homes in the governorate of Saada and the rest of the governorates, is convicted and disapproving and amounts to a war crime that those responsible for its implementation deserve to be brought before the judicial authorities. 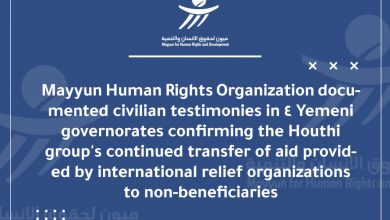 A statement condemning the Houthis’ continued theft of UN aid